Did you guess thrifting? Did you? Well, if you did, you are correct!  My friend texted today and wanted to do our entire thrifting trip but backward. Instead of starting in Reidsville and ending in Martinsville, we'd do the opposite and we did!  I found a Nintendo DS Lite in the Goodwill with an old GBA game in it for $3!  It works, too!  I was surprised, but I'm glad I found it.  I had to buy a charger and stylus but they were less than $9 shipped. (I ordered them online)  That is pretty cool!  The bottom screen is a bit scratched up. I might replace it if I actually use it.  I will be looking for cheap games at Goodwill.  I looked online and it was insane with the prices. Yikes!  The game that came with it is a combo cartridge. It has Life, PayDay, and Yahtzee! Cool!  It takes the old GameBoy Advance games too.  That is what was in it.  I think it's a good buy for $3!

I found a lot of other things, too. I was able to get the little saucers or dessert plates that match my dinner plates. The matching bowls were gone. D'oh!  I got a wallet, a purse, a jack o lantern, a mini coffee cup, two pairs of shorts, a Pokemon mug (Gengar) and I think that is all?  It was a pretty good haul.  Keep in mind I got all the stuff at two stores. The Goodwill in Martinsville and the Goodwill in Reidsville.  I'm very pleased with the DS as I always wanted one.  I even have a pouch for one! I got it some time ago just because it was a cool pouch. I used it for something recently so I have to figure where I put it.

We ate at Carmela's again.  I got the fettuccine alfredo again, too. It's so good. Want to see it?  Look at this..... goodness, now I'm hungry again! :p 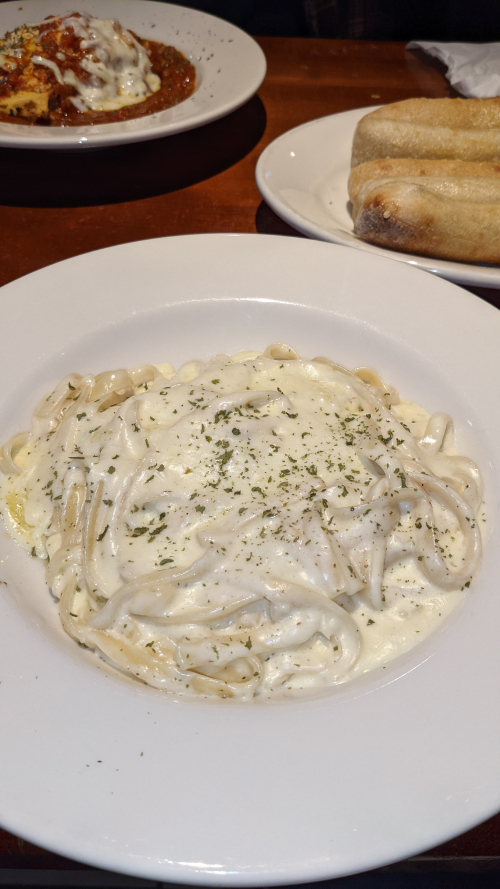 The dish in the background is lasagna.  We both liked our food.  It was a good trip with an excellent meal to end it out!  My friend ordered a couple of power pack thingees.  They came while we were gone and he ran by for us to get them. (He got me one)  It's charging now. It's pretty cool.  It has ports for a regular outlet plug, USB, etc. It has a flashlight too.  The jump box only has a USB port for charging so this will definitely come in handy in case of a power outage!