I bet you know what I did today! LOL!  I found two amazing finds.  We went to Reidsville and at the Salvation Army store, I found a few little things but my friend walked over and showed me a little thermal printer.  It was brand new in the box. It makes little pictures on thermal paper. You can also buy sticker paper for it. It's nifty!  It was $3!  It retails for $37. on Amazon. Whee!  After Reidsville, we went to Mayodan NC to try a new Goodwill we haven't been to before. I found a candle and a box of cards there.  The next great deal was in Martinsville.  We went there after Mayodan and I found a single cup coffee maker new in box for $4.00!!  I found it online for $69.  It takes K-cups or you can use the reusable filter that comes with it. It's so cute!  My friend even suggested it would be good for me to carry to the beach in case there were no coffee makers. Neat!

I've played with the little printer and it's fun! It has settings in the app where you can create a little to-do list and print it out.  It's so nifty! I love finds like that. The other things I got were a three-wick candle, (it smells sooooooo good), a Christmas light tester, a mug, an old Yahtzee game, a pack of vintage cups, a kindle cover (sadly it's too big!), and a snowman doorstopper.  It was a pretty good trip.  The coffee maker and the little printer being phenomenal deals!

Here is the little printer:

I love it and I put a set of printer rolls on my wish list at Amazon. :p The prints I've done so far are very cute. It's definitely going to be used in journaling.  All I had to do was search for the app on Android, download it and pair it via Bluetooth to the printer and I was able to start using it asap!

Here is a sample of the print.  The first is a sample to-do list that I made and the second is an artistic rendering of a picture of a Starbucks cup I took some time ago. 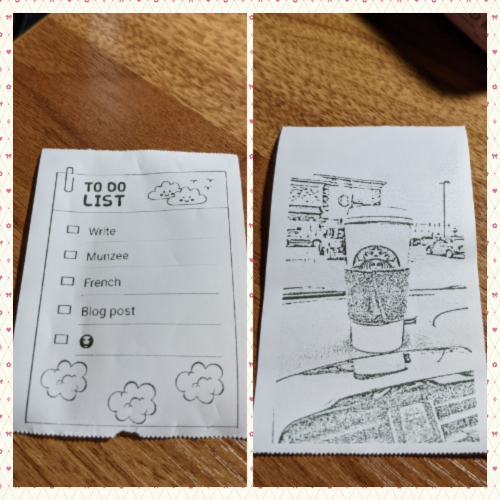 Pretty nifty, eh?  It was a great thrifting trip.