Home Contact me About Me Profile Archive Subscribe
Sorry, sorry.
Sunday is not my fun day! :p

I was going to post on Thursday evening but my Bluetooth was acting up.  I finally gave up! Yesterday it was still being wonky. I got it working today, finally.  I was going to post last night but when I looked at the clock, it was three minutes until midnight so I knew I wouldn't have time to post, so I just decided to wait and try again today! So, here we go. Thursday, my friend texted and wanted to go thrifting.  We usually go on Friday after he gets off at noon, but he asked if I wanted to go then.  I figured, why not!  So, we went to Reidsville and ate at Bojangles and then went to the Salvation Army store. I found a Fossil handbag! I actually found two, but I only got one. It's fabric and it's pretty nifty.  Here is the picture of that: 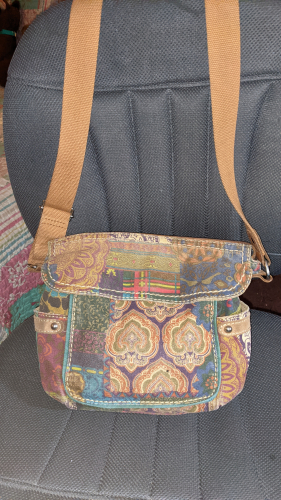 It has a flap pocket on the front and a slide pocket on the back.  I like those to put my phone in. The front pocket is perfect to store my face masks in!   My Sak bag had these features.  I especially like the pocket on the back for my cell phone. I look for that now when I get a 'new' purse.  I'm already using this one.  I thought it was nice for summer. I got a few other little things in the Salvation Army store.  At the Goodwill in Reidsville, I found a Mickey Mouse mug that looks brand new. I can always use another mug and this one is sturdy. I'm not a huge Disney fan, but I do love Mickey! I also found a little radio for $1.00 and a little cactus ring holder.   We went to the Mayodan Goodwill too and I found a HUGE box of Avery address labels.  I got those. There are very few, if any, sheets missing. That will give me labels for a long time!

I also got a little notebook in there.  It was a little graph paper notebook originally from Staples.  Neither my friend nor I got to really look as much as we'd like to as there was some idiot woman with her kids running rampant through the store. They were screaming and slamming things and we were both about to drop kick some brats.  So annoying. I was glad I did find the labels though. I already made a sheet of them and they look great. :) It was a good thrifting trip.

Yesterday, we didn't plan to do anything but he had mentioned a local place after we thrifted but they were closed. He texted me yesterday to see if I wanted to go since we couldn't on Thursday.  I agreed and we did.  That was all I did yesterday. I spent the rest of the day at home relaxing.  Today, I planned to not even leave the house.  Plans changed, though.  I was very low on good stuff to eat! I had a voucher for a free combo meal at McDonald's, so I went to get that. I ate at the park. The park is right across the road from the grocery store, so since I was right there, I decided to go and get that done.  I did!  I now have a lot of goodies in the house to eat so I won't have to worry about running out of anything. So glad to have that done! :p