Yes, we may get some snow here overnight and into tomorrow.  I almost skipped my walk today but then I figured if it snowed a lot tomorrow, I'd miss that day of walking so I went.  I wanted to walk to the post office but I didn't.  I did run out later and drove to the post office.  I only had one pen pal letter.  I got that and headed to Starbucks. I figured if I was going to be stuck in the house tomorrow, I'd at least have Starbucks tonight. :p  It was good, too!  I came home and did my workouts.

I am going to get off of the computer shortly and play some Pocket Camp.  I haven't played much today.  I want to relax a bit before bed.  I also want to read more on my current book. It's good so far, but I'm not very far into it.  I'm just waiting to see if we are going to have snow.  One local college has already cancelled classes for tomorrow and nothing has happened yet!  Weird.  I guess they are being extra careful.

I like to watch it snow from my window.  If it does snow tomorrow, I'm going to sit in at my desk in front of my window and watch it snow.  I plan on having a nice big cup of coffee with me and I also hope to write all my pen pal letters.  I only have four to write including the one that came today.  Oh and I found another potential one and I'm going to write a letter to her too.

I went for my walk today and it was sunny and nice.  Well, it was a bit chilly, but I took care of that by wearing my hoodie.  I walked a bit further than I have been doing since I knew today's workout was a PIIT routine and it wouldn't take but half an hour to do.  They were only half an hour long, but they were HARD! I made it through though, so that was good.  After I finished my workouts, I took a small break and then washed dishes so I could fix lunch.

I'm now sitting at my desk looking out the window and watching a show about the Heaven's Gate cult on HLN.  It actually aired last night, but I saved it to my 'DVR' and I'm watching it now.  I can't believe these people actually believed this stuff.  It's sad what some people believe!

I read more of Sleeping Beauties last night.  I'm about 11% in and so far it's really good.  I think I'm going to like it.  It's got a lot going on.  After I finish posting here, I'll probably grab the Kindle and read some more on it.  I am in the mood to take a nap, but if I do, I won't sleep tonight.  I would take a bath, but I don't want to fall asleep in there. lol  I take really hot baths and they are sooooo relaxing!

I replied to my latest batch of pen pal letters today.  I went by Starbucks and got a Cascara latte and brought it home and enjoyed it while writing letters.  It's a good thing I decided not to go in and write letters today.  The place was packed and there was no where to sit!  I brought my delicious latte home and wrote out the letters that I had.  I decided to run to the post office so that I wouldn't have to fight for a parking spot tomorrow.  I mailed off the letters and then checked my box to find six more!  I mailed off five and came home with six!  That is pretty cool.

I also worked on my bullet journals today.  Both my current one and the new one.  I added a pretty blue ribbon to the new one and I did next week's layout for the current one.  Wait... I did that yesterday?  Oh well, it was done this weekend! In any case, I'm ready for the new week and I also have my new bujo completely set up except for one two page spread.  I'm still trying to decide what I want that spread to be!

Sunday is almost over!

I have been busy all day.  I just realized that it was almost 10 pm and I haven't posted to my blog today.  I am going to do that and then wash my hair and crash.  I have a bit of a cold coming on and that sucks.  My nose has been runny all day. I went to the store to pick up a few things I needed and I got some tissues while there.  I'm going to need them!

I finished the setup on my Moleskine bullet journal.  It's looking great!  I am working on a video and hope to have it ready soon.  I made one earlier, but I didn't like the quality so I did another.  I hope this one is better.  I set up this coming week in my current bujo.  It's shiny!  Here is that one: 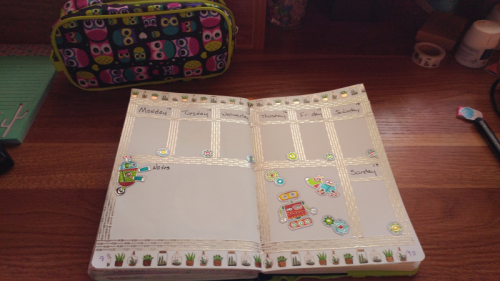 I got this new desk yesterday and put it together. I love it. It's perfect for everything.  Bullet journals, pen pal letter writing,  computer use, etc. I love it! 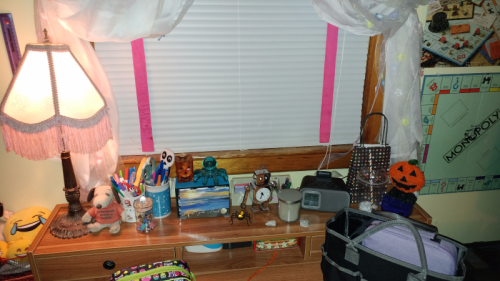