So, I walked today and I came home and instead of doing my workouts, I went on a few errands.  I came back here and then took gifts to my friend's house.  I stayed for a little bit and then headed back here.  I played a lot of Pocket Camp. :p  I just now finished my workouts.  I have my bed linen washed and back on the bed.  I've done my French lesson.  I just need to wash my hair and I'm totally done with my to do list for the day.

I got myself a few $1 items and wrapped them up and put them under my tree.  I got a puzzle, a box of candy canes, and a cute pen.  I wanted to have something under there.  It's not much, but there you go!  I really don't have a lot to say tonight as you can tell.  It's been a long day and it's only a few minutes after 9!

I needed to go to Family Dollar tonight to get a bag of popcorn. I air pop some and put it in a Tupperware container and eat on it for several days.  I just make fresh when that is gone.  Well, I meant to go to Family Dollar and just get popcorn and perhaps some hair ties.  I ended up getting ten dollars worth of stuff!  Sheesh!  I got two shirt boxes for gifts, a set of three gift bags, a roll of snowman wrapping paper, a set of gift labels, a cute little metal tin, and a bag of Cheez Doodles! LOL  Shame on me! :p

I did walk today and get my workouts done.  I have my bed linen in the dryer. It's ready to go back on the bed, but I keep forgetting to go in there and get it!  I did get my hair washed and dried.  I planned to put the linens on after that, but I did my French lesson and then decided to post to my blog.  I was tempted to run over to Starbucks while I was out going to Family Dollar today, but I decided to just come back home. I'm sure I'll go one day this week.  The last time I was in there, there was another tumbler that I liked.  Like I need another tumbler! LOL!  It's a cute one, though!

I left there and headed to the library.  I needed to update my card so I could use the ebook service.  I checked out three books while I was there.  Two French books and Dangerous Ground by M. William Phelps.  I already started on it. :p  The French books are for language learning.  I thought it would be nice to have some backup to Duolingo.  One is a 'workbook' of sorts and the other is French and English grammar.  They are presented side by side for comparison.

I got back in time to do my workouts, but I decided to wait until later this evening to do them.  It's a HIIT routine, so it will only take me thirty minutes.  I can do that later.  I am glad I got to the post office and the library.  I hadn't walked that far in a while, so it was a bit tiring.  I came back and sat on my bed with a cup of coffee and my book.  I'm going to finish typing this up and then ge ready to fix my lunch.  After that, I'll probably just relax for a while and then do my workouts.  I slept a lot better last night than I have for the past week, so that made my walk a bit better.  I also got to meet an adorable Lab and that helped too! :P I played Pokemon Go on the way down, but running that and my fitness app was making the battery go down quickly, so I stopped before I got to my turn around point.

So, I told you in my earlier post that I might post again today.  Well, I'm posting!  I wanted to tell you about my day up until now.  I ate leftover pizza this morning and had three cups of coffee!  My friend and I sat on the balcony for a while just enjoying the view.  I decided after a bit to go out.  He wasn't ready to go yet, so I went out and walked.  I went to Big Lots, Dollar General, and several different beachwear stores.  All are having good end of the season sales.  I got two NICE t-shirts in the Bargain Beachwear (My favorite beachwear shops) for $10!  I thought that was a great deal.  One is the an exact match to one I got in June but in a different color.  It's red.  The other shirt I got today is blue.  Both are pretty.

I also found myself a really nice heavy duty coffee mug in another beachwear store.  I can't remember which one at the moment. I always bring my bestie a present from the beach that is something to do with turtles.  It's getting harder and harder to find something different to carry her.  I found something though.  I won't mention it in case she reads this. :p

In that store, I found a pink long tank that I bought half off of the sale price, I think I paid $4 for it  I will use it as a beach cover up and it can also be a good workout shirt for at home.  I went in soooo many beachwear shops.  It's a nice diversion and it's usually nice and cool in them!

I came back here and I have my phone charging.  It went down to 11% while I was out. Oops!  I forgot that it wasn't fully charged when I left the room.  It's charging now and hopefully it will be pretty close to full when we go out tonight.  I am not sure where exactly we are going.  He mentioned perhaps the Dead Dog Saloon as we both love it.  We had planned to do that tomorrow night, but neither of us like the guy who is performing tomorrow night.  They have live music at the restaurant.

So, I may update again later tonight and I may just do it tomorrow. We'll see.  OH! I did my workouts this afternoon.  It was cardio.  WAH!!!!!!!!!!!! LOL  I did them though.  After I post this, I'm going to do my French lesson with Duolingo and then wait to see what we are going to do tonight.  I took a picture with Photobooth of the ocean. I don't think it will look as good as a picture from my phone, but I'll share it here: 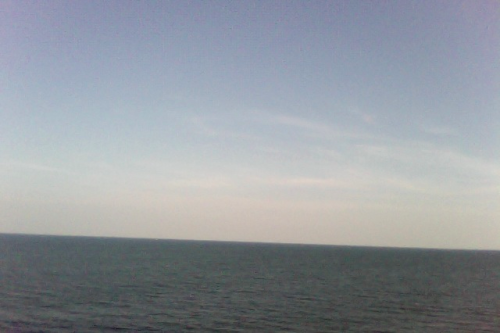