No, I didn't get the mower going, I didn't get the lawn mown either.  What did I do?  Well, I got my car registered and the tags transferred from the old car to the new car. Yay! My car is now street legal.  I was going to get a Virginia inspection sticker, (I have a NC inspection but they don't give stickers) but the place I go to was closed for the week. I have a backup place but by the time we got to the first place, the other would be closed. My friend got off early today and we drove an hour away to a DMV express location that took 'walk-ins'.  They did everything from inside, but I was able to get. my business taken care of. I'm so glad!  I, of course, had to take it out for a bit this evening.  So smooth!  I love it.

While I was out, I took it through the car wash and got some food.  I'm going to have to get used to the new interior.  My cup holder is not in the same place, my window buttons are in a different place too.  I love that it has the controls for the radio on the steering wheel!  I listened to my iPod while driving and that was fun. :)

I stopped by the park and my favorite tree and deployed a virtual Munzee. I also got a Pokestop while out.  I was going by the post office, but I figured that I could do that tomorrow when I went to get the inspection sticker.  I need to get a book of stamps, too!  I want to get my letters caught up.  I might even go to Starbucks and hit and the drive-thru. Who knows? :)

By the way, the DMV Express office that we went to is in a VERY rural area.  These are pictures from where we were in line.  We thought the GPS was tricking us. lol

Good news I have Gunter! My Goonts! lol

Okay, so if you are not an Adventure Time fan, that title will make no sense!  Gunter or 'Goonts' as Ice King sometimes calls her/him? is a penguin on Adventure Time.  Ice King acts as if Gunter were a boy, but considering Gunter laid an egg and hatched a kitten, he is her.  Confusing?  Yes, but if you watch Adventure Time you get used to it. LOL! So what is with Gunter thing? I named my new car Gunter!

Yes, it is now parked in my backyard.  Whee!  It's a black 2015 Nissan Versa Note and I love it! It drives so smooth.  I filled it up in Greensboro (where we bought it) and drove it home.  My friend and I went to eat while we were in Greensboro and I just followed him to the diner we ate at.  We ate and I didn't even touch mine hardly at all.  I was a bundle of nerves.  I brought home the leftovers and ate them when I got here.  I need to put it on my insurance and get my tags transferred and I'm ready to go.

The AIR WORKS!!!!!!!!!!!!!!   It actually got too cold in there for me! That is a nice change from my car with absolutely no air.  It has a CD player/radio/aux. It has hands-free calling via Bluetooth, too!  It has a 12v adapter AND a USB and aux hook up.  I can put my iPod in there and listen to audiobooks, podcasts, or music.  Very nifty.  I'm quite pleased with it.  I just want to get my tags on it so I can drive it all over the place. :P. I took a few pictures when I got in and I'll share a few.  I'll take better ones when I can. :) 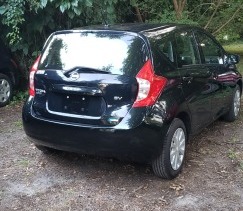 I am posting this right before sitting down to start book four for this year's NaNoWriMo!  Wish me lots of luck! :)   If you are curious what all I have on my desk for this here is what I have!  To the left is a stack with the last three books, the notebook I've used from the second year out, and a few other things.  Then we have my coffee in my NaNo mug!  My iPod is playing beautiful Classical music and the MacBook Pro is open to Scrivener to my first Day's work!  I also have my new Midori TN but it's just there because it's pretty! lol

Sorry about last night.  I was doing things and had totally planned to make a blog post and then I realized how late it was.  I just decided to show the completed puzzle and call it good. :p   I didn't sleep well again last night.  I've been so tired all day, but I would not let myself take a nap.  I'm hoping it will help me sleep tonight.  We'll see!

I had to run to Dollar General to pick up a few things I needed, so I went to the one where I knew they had the puzzle I wanted.  I bought it.  I also bought some cute Halloween goodies.  Two pair of socks and a little jack o' lantern container.  They don't have a lot of their Halloween stuff out yet, but they do have some.  I'm hoping to get some jack o' lantern mugs!

I saw something in Dollar General that I'd heard of but hadn't seen yet.  They have really cute planner supplies now!  It's a little display that has undated weekly pages and undated monthly pages. They also had dividers, clips, sticker strips, magnetic bookmarks and more. Everything was $1 each! So cool! It's for a small ring binder planner.  I have one of those that I bought many years ago. It's still in excellent condition. Now I can fill it cheaply.  The inserts are cheap, but they aren't cheap.  Does that even make sense? LOL . In other words, they are nice inserts, they are just inexpensive.  You can't beat $1 for supplies.  I purchased three packs of the weeklies, two packs of the monthlies, a pack of the clips, and a pack of the magnetic bookmarks.  I meant to get a divider and forgot.

So, last night, I go to open Virtual Families on my iPad and it has reset to the beginning. OH NO! This happened once many years ago and I just had to start over and I was not happy.  I contacted their support last night hoping they can get the game back.  I figured they probably could not.  Then, I remembered that the game was on my iPod touch. I went through a ton of programs before I could find one that would back up the game on the iPod and then transfer it to the iPad. It worked!  Of course it's not the same family I was on in the iPad version, but I had gotten most of the extras in the game already so I won't have to start over and start collecting all that again.  Thank goodness. I am never going to delete the copy of the file I put on my computer in case this happens again.

The game has trophies you earn throughout play. I have almost every one.  I also need to collect two more things and get their trophies and that will give me the rest and I'll have them all.  When my game reset the last time, I had everything but ONE thing to finish.  Ahhh!

Okay, before I go, here are the cute Halloween goodies I got!

I am off to a roaring start on Nano, too!  I already have 2600 words written!  Yeah, I got on a roll.  I had my coffee, my Macbook, and my iPod playing Classical music.  I might stop now and just continue on tomorrow.  I think I've gotten a good start.  I may cut the first part out and put it in after the part I've written.  I think the book would start off better with that at a later point.  I may just cut it and work it in after the part I've written.  I just introduced two new character and I'm happy with them already.  I guess I should take a break.  I'm already over my projected words for the day.  It's good to start out strong.  I'm going to edit what I have to see if I want to cut the first part out and redo it or just add it towards the end of what I've written.  I can't decide if I want to leave it the way it is.

I have a major plot line planned for things that are going to happen in this book.  I have a character that is going to come in and cause all kind of problems.  I'm not sure how quickly to introduce him though.  We'll see.  Plus, I still haven't picked out his name yet! LOL!  I have a background for him, I just don't know what to call him yet.  Okay, I'm going to see if I need to rearrange that first part and then go update my first word count for this years NaNo! :D

By the way, I did my walk and workouts today as usual.  It was nice out there.  One of the places I walk is on a sidewalk through a nice neighborhood.  I saw a lot of candy wrappers from last night's trick or treating!  Same on these kids for tossing their litter down.  I DID find three things of wrapped candy that some kids dropped.  I check out the packaging, no holes, so I ate it. :p  I also found a little set of cute pumpkin stickers that some one had dropped.  Yay for cute stickers! :)