So, my friend texted me today and asked if I'd like to go to Reidsville and eat at Carmela's or Pete's. I said, YES!  He came over and we went and we ate at Carmela's. They are an Italian place that is great.  I got fettuccine alfredo. I have been wanting some good alfredo for quite a while now, so I was so happy to get this.  It was delicious.  Just look at it: 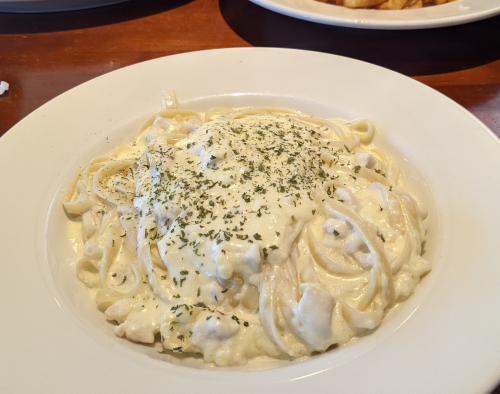 Makes me hungry all over again! :p. After we ate, we went to the Salvation Army store and the Goodwill over there.  We didn't go to Eden and on to Martinsville, this was a Reidsville only trip.  I found a 16 oz Starbucks holiday mug from 2013 in the SA store. I also got a case for my iPad Mini for $1 and I got a little scrapbook 'kit'.  It's the scrapbook and inside it has stickers and papers to use in it.  I looked it up online and found the same thing at Amazon for $24. I paid $2 so I think that is a great score! I think I'll save it and use it after the next beach trip.

At Goodwill, I found a Kate Spade wallet! It's in perfect condition. It's only missing the clip-on wrist strap which I wouldn't use in any case.  It's nice and I was happy to find it.  I only have one Kate Spade thing and this just made my day.  I also got two mugs. One with a penguin and one that is a jack o lantern! :) Both are adorable and for display, not drinking.  The Starbucks mug I found at SA is for drinking. It's in excellent condition. It was a small thrift run and a small thrift haul, but it was a good one.  I enjoyed getting out for a bit and I love the things I found. I tried my phone in the Kate Spade wallet and it fits fine! I love that I can just toss my debit card, license, and phone in it and go.  Good for when I don't want to carry a purse.

By the way, Big Sur is no longer laggy. In fact, it's pretty damn fast! I love it.  Everything is so neat. I have read some sites and watched a few videos on it to get tips and tricks.  I want to do more of that tomorrow.  While we were in Reidsville, I was capturing a lot of virtual Munzees as we came to them.  That was fun! I was able to get some unique stuff that isn't around here so that was even better.  There are a LOT of virtual over there.  A zillion times more than are here in Danville.

Photo shoot for a purse?

YES! LOL  I got my purse today and I moved my stuff over to it and then took it out in the yard for a photo shoot. :P  The lighting in my house isn't the best, so I figured that would be better.  I have to share some of the photo shoot with you. :p

So, there you go.  Some outside and some inside.  LOL  I'm in love with this purse.  I switched from my current wallet back to my Kate Spade one. May she RIP.