My new Starbucks Gold card arrived today! It's so pretty.  I was a bit afraid it would be paper since they've moved to those with the ones they put out, but this is plastic. It's so pretty. :)  I'm so glad to have 'my' Gold card back! 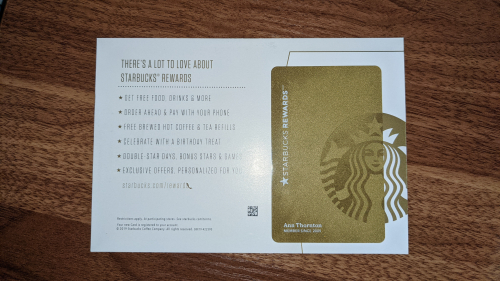 My friend texted me today and asked if I would like to eat around 7. I said I'm ready now.  This was about 5:20 or so. lol . He picked me up a few minutes after 7 and we went to eat.  We ate at one of my favorite local places that we don't get to often so that was a treat.  It was delicious! He wanted a milkshake at Cookout but the line was around the building, so he went to get gas and carried me around to look at some lights. Yay!  We went back by Cookout but they were still busy so he went to look at more lights.  He also asked if I'd like to go to Starbucks. YES, Yes, I would!  I asked if he minded if I were in there for a bit as I wanted to try to get the cards I didn't have.  He said no problem, so I went and found several that I needed. I ordered a drink, not what a wanted because they are out of cascara.  Well, I am talking to one of my favorite baristas about the cards.  She didn't ring me up but she was making my drink.  As she was about done with my drink, I mentioned cascara and asked if she thought they would get some back in the summer.  She said they HAD cascara. Me: O_o She looked and sure enough, there was a brand new bottle opened and on the counter.

"Would you rather have that?"  She asked.  I told her if she'd already made the other, nevermind.  She then pours the almost completed drink out and makes me a cascara latte. AND she gave me a grande.  I had ordered a tall. I love my baristas! I got my favorite drink and it was so delicious.  Since I'm the only one that orders cascara, I should be able to get them for a long time. YES!  So happy!

OH! I also asked her about the multipacks.  Those you can't get without loading them.  I asked if they had any left over after the holiday could they save out one for me if they were just sending them back. (I guess this is what they do) . She said she'd ask and if it was okay, they'd save them for me. Yippee!  So happy! I now have almost all this year's holiday cards. I am still missing a few, but I hope to get those on eBay.  These are single ones that they either didn't get or are out of.  I got a cascara latte, got delicious food, and got to see lights. I was a happy camper!

So, I spent some balcony time this afternoon after getting back to the room.  My friend and I went out after that.  We went to North Myrtle Beach.  I wanted to go to Tuesday Morning and I got to go!  I got a planner and some inserts from a different kind of planner.  I also got some washi. :p We went to the Goodwill while we were up there.  I usually find stuff I want at that one, but this time I didn't. Oh well.

We went to Sonic for dinner and it was good.  We hit the grocery store to pick up a few things we needed after that.  Now, I'm sitting in the room on my bed relaxing.  I like my planner.  I am going to see if I can't get some more stuff for it.  I'm hoping the inserts that I got will work for a planner I have at home.  The planner I bought was one I've never seen. It's got weird rings.  It's pretty though . It's green and has Hello on the cover.  The receipt says "Planner Hell" LOL!

I am going to take a beach walk later, I am not sure when.  Sometime between now and midnight.  I still need to do my French lesson.  I guess I can do that after I finish posting this.  I might go out on the balcony for a bit.  My friend is watching tv and it's way too loud.  I already have a headache and it's not helping at all.

I have dealt with many companies over the years.  Some have good customer service, some have bad.  Starbucks has the best customer service of any company, ever.  If I have to contact them for anything, they get back to me quickly and do their best to resolve my issue.  Whether it's a phone call, e-mail, or in store, they are the best.  On Friday, I got the wrong drink (Which is extremely rare)  It's only happened once before and I've been going to Starbucks for YEARS.  I went in today to get my usual and told them about the incorrect drink on Friday and they gave me the drink I was supposed to get on Friday.  I was willing to pay for it, but they comped it because of the error.  Most places would have said, "so sorry, you should have come back on Friday."

Starbucks, you have the best customer service representative by phone, e-mail, and in store.  Thank you for being the best darn coffee shop ever!