It's been raining here all day.  We are getting the remnants of Sally.  I think it's supposed to be gone tomorrow.  I hope so as I want to go to the grocery store but I don't want to do that in the rain.  It is guaranteed to be pouring when I'm loading and unloading the car!

I did run out today and get some gas.  My car was down to a bit under half a tank after coming back from the beach.  My friend said he'd fill it up when we got home, but he hasn't gotten around to it so I did it myself.  I like to keep it near full. It's so funny because, with my Cruiser, I'd run it until the gas light came on and fill it.  I don't like to get my fuel level below half with this car.  It's still running well and it hit the 93,000-mile mark as we were driving home from the beach.

I want to do a recap post of the trip.  I have a lot of goodies that I got to share.  At the Longs SC Goodwill, I saw a box that looked like a GPS.  My friend went over and brought it back along with a few other electronics.  They were in the scarfs!  There was a TomTom Ease, a Nike Fuelband, and a little digital camera.  My friend bought all three.  He had been meaning to give me one of his GPS devices so he just gave me this one. It's cute and small so it's perfect for my little car. :P. He also gave me the Nike Fuelband.  I was sad to learn they no longer support it through an app that can be synced with.  I think though that I have an old version of the app on my oldest iPod touch.

I am working on a way to update the little TomTom.  The TomTom app won't work with my Mac for some reason.  I looked and it seemed other people have this issue, so hopefully, I will be able to do that soon.  I tried it out last night and it did find Starbucks, but it took me to the old location.  That it found the Starbucks at all made me hopeful!  Even if there is a small fee, I'd like to update to current maps and locations.  I just need to be able to run the app on my computer.  I no longer have any computer running Windows, so that is out. Oops!

Anyway.  It is another beautiful day here.  I think this might be the prettiest day we've been here.  It's sunny and HOT! I sat on the balcony for a few minutes before giving up and coming in. :p. I took a picture to share though.  We are probably heading to Conway today to visit a Goodwill, a Salvation Army store, and a pawnshop for him. 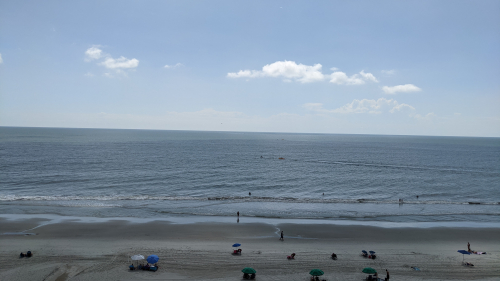 I walked to the Springmaid Pier and back.  I took a LOT of pictures so I'm going to do a Google photo album as I did before.  It's quite a few pictures.  I think near 100, so, I hope you enjoy!

Ah, it's nice to be posting from the beach and not on my way home! The two extra days are definitely nice! I am probably going to walk to the Springmaid pier today.  It's either today or tomorrow! LOL. I am running out of time. Yikes!  I will visit it and walk on it and enjoy that.

I took a few pictures of the beach a few minutes ago. I should have some interesting shots later after walking to the pier!  At least I think so. :P. Here are the ones I have for now: 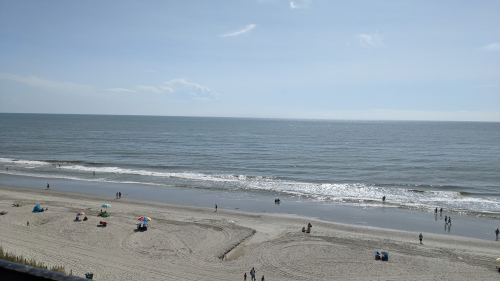 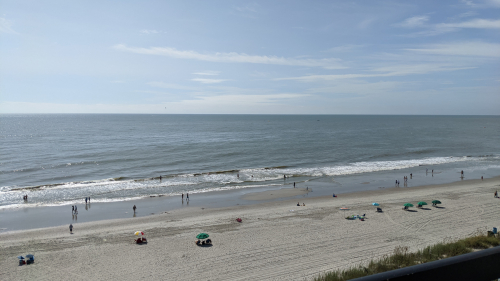 My friend is currently getting ready and we are going out to North Myrtle Beach today.  He ordered something to be delivered up there and we are heading that way.  We should be going to Goodwill and Salvation Army thrift stores up that way. I'm hoping for us to eat at King's Famous Pizza, but I'm not sure yet.  I would also like to go to Tuesday Morning.  It's dangerous but it's so much fun to shop! lol

I was watching the ocean a bit ago and saw a banana boat that kept stopping.  The people on the banana boat kept falling and jumping into the water. I've never seen that before.  Drama at the beach. :p. I took some pictures of the sky just a moment ago because it was so pretty.  Enjoy. 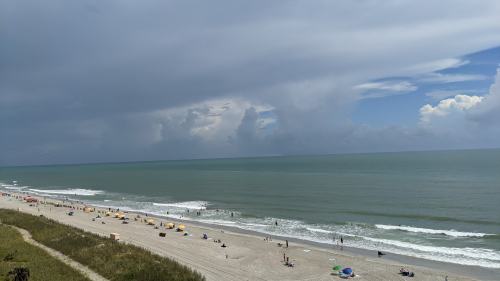 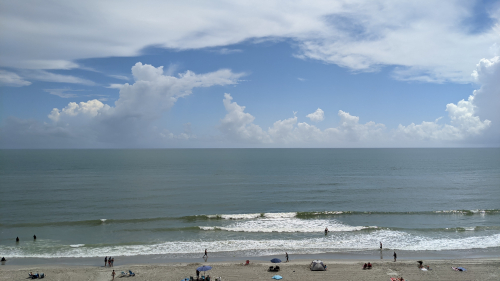 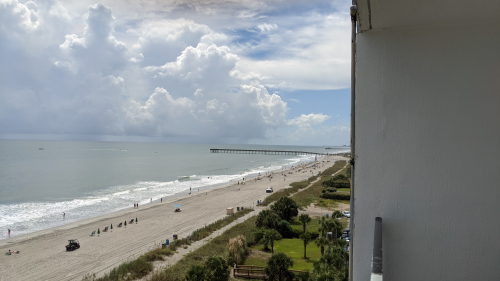 Isn't the sky in that first picture just gorgeous!  The clouds in the last one are cool too. It's a beautiful day here for sure. ^_^

It's another beautiful day here. It's cloudy but it's also sunny.  I took a couple of pictures to show the contrast! Here you go: 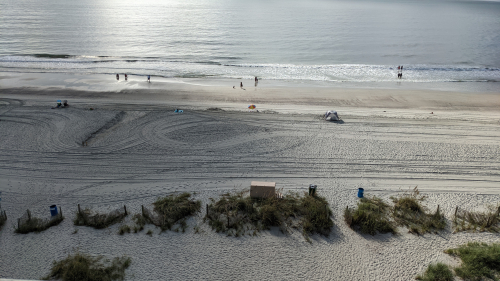 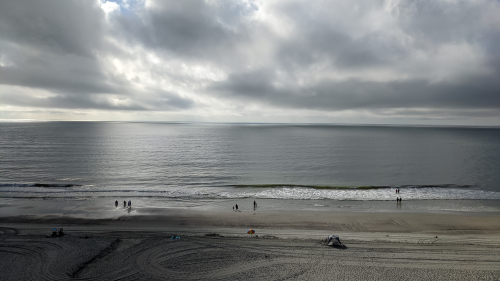 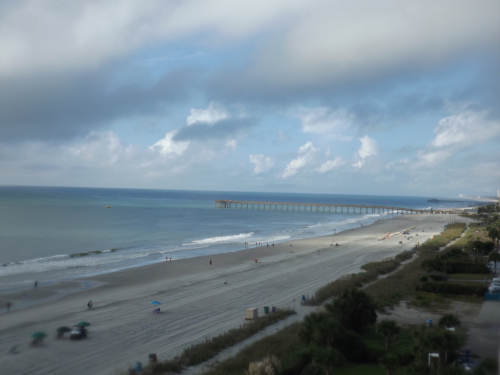 That last one has a bit of a haze to it. I took my camera out to get a few zoom shots of things and the lens never did completely un-fog.  D'OH!

I just took this one a few moments ago. As you can see it's still beautiful today! 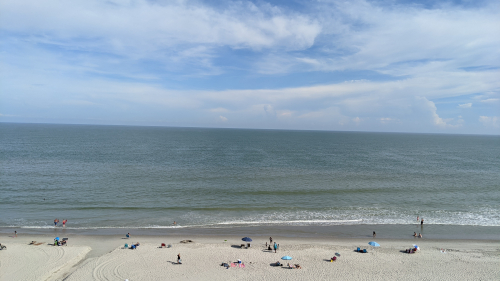 I'm hoping we are heading out soon.  There are a few places I'd like to go.

Well, it has totally cleared off here and it's beautiful!  I'm loving this weather.  It's so pretty out there.  I still haven't decided on what I'm doing today.  I guess I'll figure it out in a bit. :P 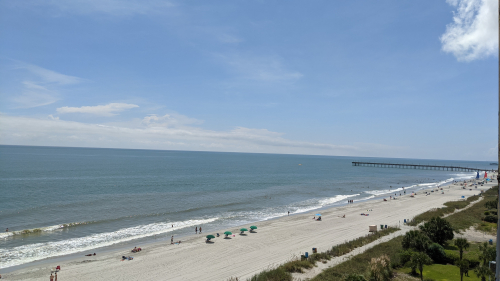 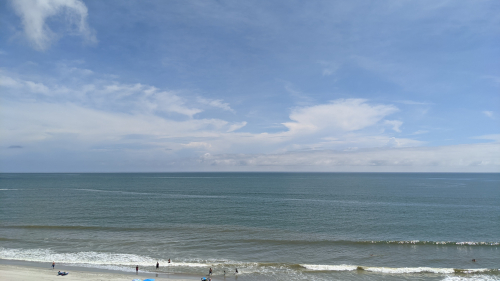 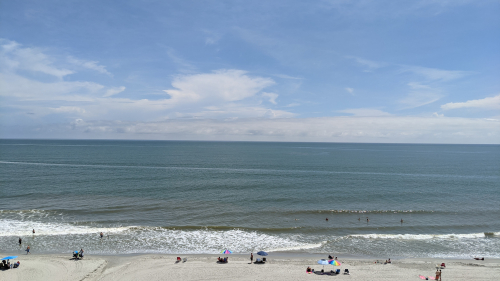 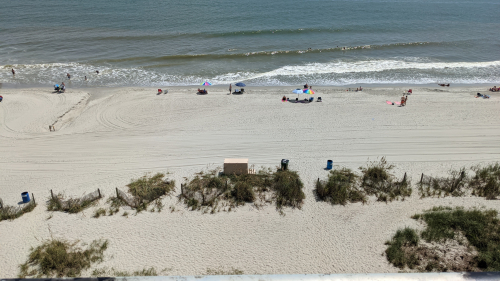 I'm so glad we are not leaving Sunday.  It's great to have those two extra days. Yay!  :)

I'm a bit later than usual posting this morning, but at least it is still morning lol. It is a bit cloudy again today but it's started to look a bit clearer out there now.  I took one picture of the ocean awhile ago and I have one to share from last night. 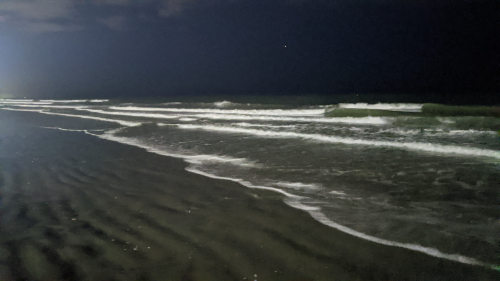 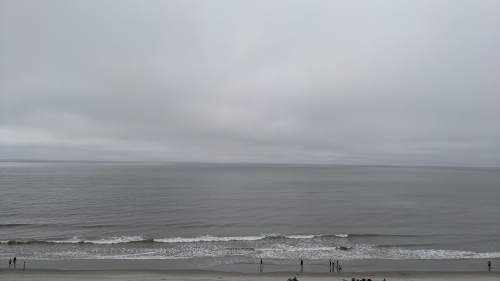 We went out and were going to Sonic but we passed by Red Robin and they weren't busy so we went there.  It was delicious!  I got the sandwich I got the other night from Denny's.  Grilled chicken, cheese, bacon, and bbq. Delicious!  After that, we drove back to the Goodwill on 501.  I saw a purse there yesterday and didn't buy it and wanted to go back and get it. Sadly, it was gone. :(  We went to one fo the other Goodwill stores we went to yesterday and I got some colorful envelopes (for pen pal letters). It was a little Hallmark note set, most of the notes were used, but it looks like the majority of the envelopes are there. Yay! I like to send cute envelopes with my letters.

I took a picture of the pretty sky and my food at Red Robin.  Here you go! 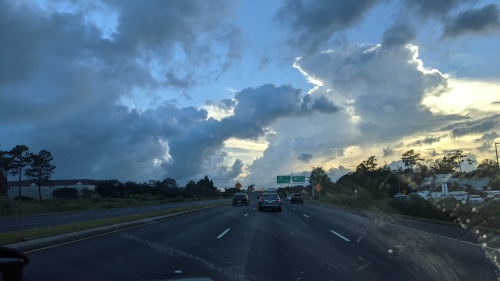 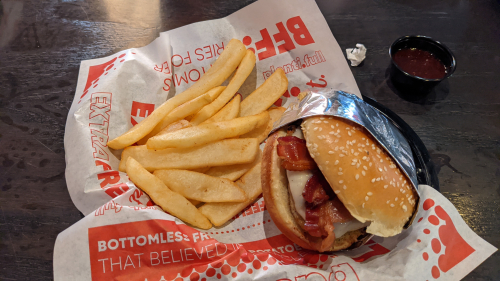 I am going to take a nice beach walk later and then I'm not sure what is after that.  I hope to sleep well tonight.  I am tired.